Nebeday is a Senegalese organization of participative management of natural resources that has been founded six years ago and achieved several projects with substantial impact.

Created in June 2011, by Jean Goepp, previously coordinator of Océanium projects, Nebeday (meaning “the tree of life”) follows one motto: “the environment at the heart of development”.

Nebeday is among the only actors to carry out participatory projects for the protection of biodiversity and the fight against the consequences of climate change, this in a particularly vulnerable area known as the Saloum Delta, which is on the Unesco World Heritage list.

For Nebeday, the environment is at the heart of a development and can only be done by Senegalese rural populations.

Nebeday’s main expertise lies not only in the fight against the consequences of climate change, but also in its intervention method that is particularly close to the populations and truly participative. This allows it to implement programs that preserve the environment and effectively combat climate change.

This “social engineering” is based on strong communication achieved through debate campaigns and especially exchanges that respect the local knowledge, customs and habits.

This expertise enables Nebeday to implement innovative projects in the climate field in response to the needs expressed by the populations.

With more than 2/3 of its territory located in the Sudano-Sahelian zone, low annual rainfall (between 100 and 500 mm) and 720 km of coastline, Senegal is one of the West African countries most vulnerable to climatic changes. Adaptation projects must therefore be enabled in agriculture, water resources and the coastal zone.

Despite the urgency of the threat, the Senegalese government is struggling to enable the fight against the negative consequences od climate change in terms of concrete public policies.

The rural and coastal population, which accounts for more than half of the population (more than 60% of the active population work in agriculture and fishing) is highly dependent on natural resources. The pressure on these resources leads to their scarcity and / or degradation, which exacerbates the process of impoverishment and makes the communities concerned more vulnerable to the negative impacts of climate change.

It is therefore in priority in rural and coastal areas, in sectors where natural resources are still present and in collaboration with the poorest populations, that climate adaptation actions will have to be concentrated, in order to give them the best chances to be adopted, replicated and integrated into local development and thus enable them to contribute to the main challenge faced by the country at the beginning of the 21st century. 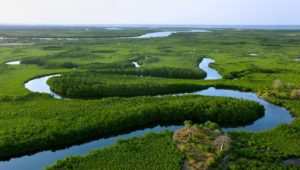 Direct beneficiaries:
The results of the project concern all the inhabitants of the MPA and the RNC, ie 50,430 beneficiaries.
-The management committees of the 2 MPAs.
-The Economic Interest Group (ies) (G.I.E.) that will engage in beekeeping, agro-forestry and bio-coal activities, ie at least 200 people.

Prevention and response to gender-based violence during the Covid-19 period in the slums of Mathare State : In progress...