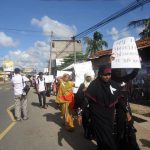 ESDF (Eastern Social Development Foundation), a Sri Lankan civil society organization that has been developing human rights development and promotion projects since 2008 in the District of Batticaloa.

In the eastern province of Sri Lanka, violence among minority women has increased since the end of the armed conflict (2009) and the military presence:

The total number of beneficiaries is estimated at 12,450.

All women in Batticaloa District (political changes in favor of women’s rights and the development of social, political and economic opportunities).