HLO is a Mongolian association that aims to improve the quality of life of people by accompanying them to a process of psychological resilience. Suvd, the founder of the NGO is a doctor and a lecturer at the university. Originally intended for medical students, Suvd decided to create an NGO to make its training accessible to the most vulnerable populations, so that they can develop their own physical and psychological capacities and create a healthy environment, conducive to their personal development.
Since 2016, the NGO has been working with different audiences such as blind children or people with disabilities.

According to reports from 2010, 108,100 people have a disability, 23,800 of those people are under 24 years of age and 9,500 are under 15 years of age. 60% have a congenital disability, the remaining 40% have been reached after birth.
The poverty rate of households with a disabled member is 42%, more than twice the rate of other households (18%) and life is particularly complicated for people with disabilities living in yurt neighborhoods . These neighborhoods have become the most populated areas of Ulaanbaatar and host 25% of Mongolia’s total population. Housing spaces are small, lack of sanitation is cruel, latrines built outside houses consist of four wooden planks around a simple hole in the ground. Roads are of poor quality and sometimes don’t reach all inhabited areas, thus displacing inhabitants of basic services. 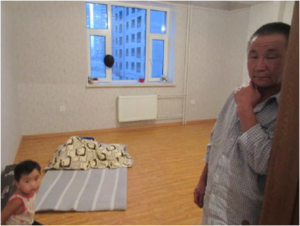 Improved quality of life of 10 disabled people living in a district of yurts through the improvement of their habitat and better support in health and psychology.