For access to quality education and housing for all in Mathare

The LEC (Legacy Education Center) is a non-profit institution, established in 2010, intended to provide advocacy, women and youth empowerment programs and education opportunities to the most vulnerable children in the community of Mathare slum. It is a community-based organization registered with the Government of Kenya with registration number KAS / CBO / 5/4/2012/495. Its leadership is made up of two members (Leah Nyalobo and Sarah Rono) approved to take on leadership roles by the Government of Kenya which has mandated them through the registration certificate above.

LEC has already implemented several projects in Mathare, including:

The issue of habitat has also been addressed by the LEC before. The association implemented a housing renovation project for widows and the most vulnerable families in Busia County, eastern Kenya. This project was made possible through local fundraising and the collaboration of local county authorities. Together, they have also set up temporary reception structures, in particular for flood victims. The members of the LEC have since worked in close collaboration with these authorities who ask them in particular to deploy counseling services to populations who are victims of GBV (gender-based violence). GBV being very present in the area, and impacting the daily life and living conditions of the populations. 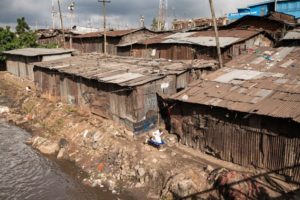 Kenya has experienced significant economic and demographic growth for almost a decade. However, the latter was accompanied by significant disparities.

The political transition initiated in 2003 has been a factor of change and development, providing the country with good economic health. Kenya has thus acquired infrastructure, in particular by building roads and railway lines.

At the same time, the country has observed exponential urban population growth rates (+ 2.2% per year between 2009 and 2019), among the highest in the world. For example, the capital, Nairobi, has doubled its population in 15 years and is today one of the largest metropolises in Africa, with more than 8.3 million inhabitants. It is expected to double again by 2035, and triple by 2050.

However, this development is not favorable to all: nearly half of the Kenyan population today lives below the poverty line and in poor housing conditions.

Thus, in Nairobi, this demographic growth is observed mainly in the slums which flourish in the suburbs. It is estimated that around 2.5 million people live there today, in extreme conditions of precariousness and insecurity.

Two slums, Mathare and Kibera, are particularly affected. Overcrowded (they host 60-70% of Nairobi’s population while they cover only 6% of the city’s surface), they are largely made up of makeshift shelters in which families live crowded together, without access running water, latrines, electricity, hygiene and permanent insecurity. It also has repercussions on the social, health and educational development of children who are often vulnerable to gender-based violence, like their mothers, and / or early married due to parental poverty.

These slums are therefore places where decay, pollution, trafficking, militia landmarks, violence and sexual violence are illustrated, with a laissez-faire attitude from the authorities. A situation which, in the short term, can only harm any form of sustainable and harmonious development of the populations.

Overall objective: To contribute to a sustainable improvement in the living conditions of the most vulnerable people in Kenya.

Specific objective: To provide access to education and safe housing to the most vulnerable people in the Mathare slum in Nairobi, Kenya.