Project financed under a framework agreement by the Ministry of Foreign Affairs of the Grand Duchy of Luxembourg, and by the asbl Diddeleng Hëlleft from the City of Dudelange.

Youth and Development (JED) / Scouts and Girl Scouts of Senegal (EEDS) is a development NGO created in 1936, and established in all regions of Senegal, inspired by Scout values, serving young people and the community. Its mission is to contribute to the improvement of the quality of life of the populations, mainly in the field of health, education, socio-economic integration and the environment, by preparing young people in particular for their role of active and responsible citizens in synergy with the Girl Scouts and Scouts of Senegal.Its areas of intervention are: 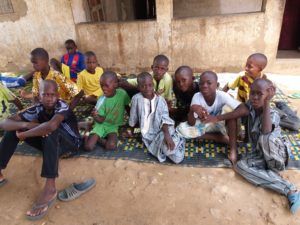 47% of the 562,539 inhabitants of Matam are under 15 years old. 45% of families are poor. Extreme poverty, but also some cultural and traditional factors, are the causes of the phenomenon of street children called Talibés. Talibé children in Senegal are young children, usually boys, sent by their families to daaras (Koranic schools) far from home to learn the Koran. However, daaras are not considered homogeneous in that talibé children are exploited, forced to beg or perform hard and often dangerous work, or subjected to physical abuse, while in others the Koranic teacher tries to respect as much as possible the apprenticeship hours thus reducing begging time. But these are the least common. In the department of Matam, more than 7,000 children are in this situation of wandering on the street and are therefore exposed to risks and deprived of their rights.

The project aims to improve the living conditions of talibé children in Matam to enable them to get out of the street. Activities put in place:

The project in details

Make a donation for Talibé children of Matam