Location: Municipality of Tarabuco, Province of Yamparez, Department of Chuquisaca in Bolivia 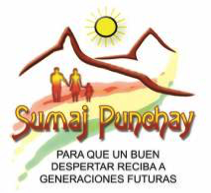 SUMAJ PUNCHAY is a non-profit, non-governmental organization that operates primarily in marginalized and remote areas of Bolivia. Affected by the high level of poverty in rural and urban Bolivia, SUMAJ PUNCHAY was formed in 2001. “Sumaj Punchay” is a Quechua word meaning “to better days”. The goal of the NGO is to provide future generations with the conditions for greater social justice, education, health, respect for the environment and biodiversity, self-determination, equality of all kinds, in the context of respect for human rights, including the rights of indigenous peoples.

According to the Center for Global Development, Bolivia is the ninth most affected country due to the effects of climate change. People living in poverty and in rural areas are strongly affected by climate change, with income-generating activities mainly dependent on climate. The main consequence for rural communities is in terms of food because climatic phenomena have a direct impact on the agricultural production system.

The objective of the project is the promotion of development based on sustainable agriculture through the management of natural resources and the strengthening of production capacities, in order to guarantee the safety and food sovereignty of the inhabitants of Tarabuco.